I usually enjoy  the “special” episodes, the ones that take the heroes out of their normal milieu and plop them in an alternate reality.  Supernatural has done this a few times, often with excellent results.  This week’s Warehouse 13 followed suit, throwing Pete and Myka into the roles of a Chicago gumshoe and his girl Friday.  Even the title cards evoked the film noir feel. 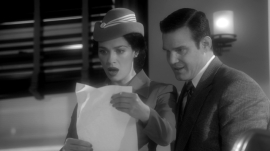 Pete and Myka are using Vyasa’s jade elephant to absorb and contain electrostatic energy balls bouncing around the warehouse.   (This is, after all, the warehouse where weird things happen all the time.)  When the elephant “overloads” from absorbing too many balls at once, its energy knocks an unfinished manuscript off the shelves, its pages to shower Pete and Myka as they float to the floor.  When the papers settle, Myka and Pete are in the black and white world of 1940s Chicago.  Except, as Myka says, “The 1940s were in color, much like the rest of history.”

They’re in an unfinished mystery novel by Anthony Bishop, one of Myka’s favorite authors growing up.  (Remember, she was raised in a bookstore.)  Supposedly he hit a massive case of writer’s block and killed himself, thus turning his unfinished manuscript into an artifact.  The jade elephant also turns up in the novel as the object of interest for an archeologist and a fortune hunter.  When both these men end up dead, Myka and Pete realize they have to find the elephant it and finish the novel to return to their real world.  Along the way, they meet the “real” Anthony Bishop, whose grief over losing his wife put him in his own story.

Pete and Myka walk into the light, and out of 1940s Chicago. Bishop stays behind with Lily.

Myka and Pete solve the mystery and retrieve the artifact.  It opens a portal for them to return to the warehouse.  Anthony Bishop decides to stay in his novel with girlfriend Lily, who’s based on his late wife.  Back home, Pete and Myka find the manuscript is completed, and it ends with Anthony and Lily in Bora Bora, just as they planned.

Meanwhile, in the present world of color, Claudia and Steve are babysitting Artie.  They throw him into a case of classic cars vanishing from locked garages (and living rooms).   Using Artie’s classic car (which he’s named “Scarlett”) as bait, the trio track down the thief.  She wears gloves once owned by Carey Loftin, Hollywood’s greatest stunt driver.  The gloves allow the cars to drive through solid walls without a scratch.  Artie says the gloves work only once (necessary for Artie to catch the thief), because Loftin always completed his stunts in one take.  Except that, the first time we see the gag, the car drives through Artie (who’s trying to stop the thief) then through a garage door.  But, oops, continuity!

One of my chief complaints about this series is its tendency to focus on Pete (particularly his immaturity for humor), which leaves less time to explore Myka, whom I find much more interesting.  This episode gave Myka (and Joanne Kelly) a chance to shine.  Even though Pete was the gumshoe, it was Myka, the “gal Friday,” who really took the lead in finding the artifact.  And she saved Pete’s life, and look gorgeous in a slinky evening gown.  More shows like this, please.