Damn!  Jensen Ackles is gorgeous in sepia.  I wish I could find a photo or screencap of him as the sheriff of Sunrise, WY.  Hey!  Thanks to Google image search, I’ve found one! 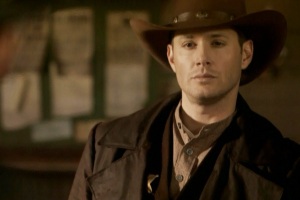 Jensen. Sepia. Am I right?

Dean and Sam travel back in time to Sunrise, WY, in search of Samuel Colt and… the Colt.  The Colt.  Dean’s inner geek emerges, Sam steps in manure.  Good times!

The episode is enjoyable for a number of reasons—and I didn’t even catch all the Back to the Future III (and II) references.   There were plenty of references to previous episodes (from waaay back in season 1), and just enough surprises to tickle. 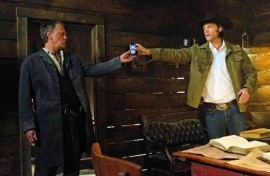 Dean finds Samuel Colt’s journal in the Campbell family library (did the boys merge this resource with the Men of Letters cave?).  One entry says “The Colt killed a phoenix today.”  And since the guys are looking for a phoenix ashes, how appropriate.  So the boys travel back in time to get the ashes of the phoenix that Colt the man killed with Colt the gun.

Except Samuel Colt isn’t what they expected.  He’s tired and retired, a self-admitted drunk.  He’s seen enough of the supernatural world to not even be phased by a “giant from the future with a magic brick.”  He refuses to ride into town with Sam Winchester to kill the phoenix.  Which turns out to be, not a bird, but a man.  Fortunately, he does allow Sam to take the gun, and Dean kills the phoenix.  Several nice little twists to that part of the story.

Other inside jokes:  The bartender is named Elkins.  (Ancestor of Daniel Elkins, who had the Colt before the Winchesters?)  Bobby references Deadwood.  Dean knows Clint Eastwood’s monkey’s name is Clyde.  Ok, maybe the last is just a joke, no inside knowledge needed.

I was never particularly interested in Heaven’s civil war, and Castiel’s part in it.  Nor was I enamored with the “mother of all” story line.  (Thankfully it wrapped up somewhat quickly.)  Fortunately, neither distracted too much from the fun “Frontierland” provided.

One response to “Supernatural Revis: Frontierland (618)”