The season 6 title card caught me by surprise.  How did breaking glass tie in to it?  The Supernatural Wiki says it’s a reference to film noir, the genre season 6 was going for.  Ok.

Every Supernatural fan has her (or his) own reasons for liking the show, and that’s no more apparent than in the wide range of ratings any episode receives.  TV Fanatic and TV.com gave this episode very high marks, yet it’s one of my least favorite episodes.  I’m not a big fan of vampires—nearly all of Supernatural‘s vampire-centric episodes are on my unremarkable list.  Or perhaps it’s because season 6 was mostly forgettable. 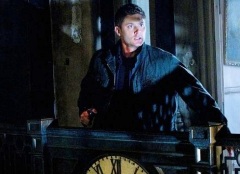 We know something is off about Sam, but don’t yet know what.  He watches (and even smiles!) as Dean is turned into a vampire. Fortunately, their grandfather Samuel shows up with a vampire cure.  How convenient!

Samuel, still one of the good guys at this point, chastises his namesake for not telling Dean of the “old Campbell recipe” for curing a vampire.  He says it’s as if  Sam  wanted Dean to become a vampire in order to search for the alpha.  The line inititally passed (by me) unnoticed.  We learned about the shapeshifter alpha in “Two and a Half Men” (which I haven’t covered yet), but was this the first reference to the vampire alpha?  Now that we know the key role the alpha vamp played in season 6, and what was wrong with Sam, Sam’s motivation is clearer.  Letting Dean be turned and not curing him was cruel.  But it worked.  By entering the nest, Dean learned how the alpha communicated with his minions, and what his plans were.

I’ve actually seen this episode a couple times (unusual for a “meh” episode), and it’s still forgettable.  Perhaps the tragic ending causes me to block it from my memory.

Sam now has his soul back, as well as a wall that blocks out memories of his time in hell.  Apparently the previous episode had Sam revisiting his past.  Is it the episode where Sam has flashbacks of visiting a town when he had no soul?  A quick check on IMDB says it is, although that’s all I remember.  Checking Television Without Pity reveals a convoluted plot not for discussion here.

Yeah, that’s not creepy at all.

What is for discussion is, as Dean calls it, Death by Dolls, or rather mannequins.  I’ve never seen any of the Mannequin movies, so I have no idea if the killings are similar.  (Like how “Live Free or Twihard” riffed the Twilight books and movies mercilessly.)  Oops, my bad.  Mannequin isn’t a horror series at all.  It’s a couple of comedies  Now I understand the subplot of the guy who’s in love with a mannequin.

The supernatural killer is the ghost of  a young woman who was ridiculed by a group of insensitive coworkers.  During one of their pranks, she fell, hit her head on a coffee table, and died.  The guys bury her body without notifying anyone.

What’s baffling for the Winchesters is this ghost shows up in various locations, and the killings continue after Sam salts and burns her bones.  That’s because the ghost is tied to her kidney, which she donated to her sister years before.  That’s a dilemma for the books.

Meanwhile, Dean is called back to the family he spent a year or so with after Sam died at the end of season 5.  Ben, the son, tells Dean there’s something wrong with his mother.  Dean hurries to… wherever they now live… to discover the emergency is mom Lisa’s third date with a doctor.  Both Dean and Lisa are trying to let go of each other and get on with their lives, but Ben doesn’t want that.  Dean and Ben have a bittersweet chat about family.  Ben accuses Dean of walking out on his family, but Dean explains it’s better if he’s not a part of their lives.  He wants something better for Ben.

Now, back to that sticky kidney situation: Dean returns to the scene of the hunt.  While Sam, Dean, and the sister are wrestling with the problem, the ghost takes possession of the Impala, chasing Dean around a parking lot.  Apologizing to “Baby,” he forces the car to crash into a storefront window.  A shard of glass impales the sister, who dies—and puts the ghost to rest.  That is one bummer of an ending.

How the hell could TV.com rate this episode lower than “Live Free or Twihard?”  Perhaps, like Television Without Pity, it’s a haven for Jensen Ackles fans, Dean girls, and Dean/Castiel worshipers.  (In fact, for its special 10th anniversary Tubey Awards, TWoP had the audacity to nominate Jensen Ackles and Misha Collins for “Favorite Actor from 2003-12,” but not Jared Padalecki.)  Since Jared’s role in “Sacrifice” was meatier than  Jensen’s or Misha (although their roles were plenty meaty) those fans probably felt the episode was less significant.  (TWoP even went so far as to put “Sacrifice” on their “Worst” list of season finales.  *Raspberries,* TWoP!) 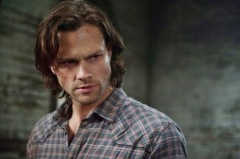 Thankfully, there are plenty of other cyber worlds where fans are not so rabid and biased, where “Sacrifice” and Jared get their deserved kudos.  “Sacrifice” is one of my favorite episodes of season 8, and is now on my All Time Favorites list, right up there with season 2’s “In My Time of Dying” and “What Is and What Should Never Be,” and “Lazarus Rising” from season 4.

Jared’s talent often gets overlooked in all the (deserved) adoration for Jensen Ackles, but this was definitely Jared Padalecki’s Emmy reel.  And Mark Sheppard’s as well, for Best Guest Actor in a Drama.  (Let me get back to you on Jensen’s Emmy reel.  It’s there somewhere.)

One response to “Supernatural: Live Free or Sacrifice, Mannequin.”