I didn’t pay much attention to this episode initially.  Was I so damned tired of the Leviathan story line I tuned out?  Or had I come to just not care about the series?  Either way, now that I’ve been fully rejuvenated by season 8…

Wow!  “Reading Is Fundamental” deftly set things in motion for season 8, while being action-packed and interesting on its own.

As the Winchesters unearth a stone tablet with strange writing on it, a teen from Michigan is struck by lightning, Castiel wakes up from his Sam-induced coma (from “The Born-Again Identity“), a storm covers the entire continental U.S., and thousands of babies are born. 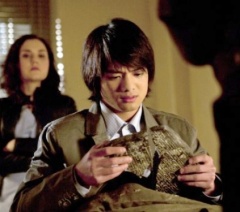 The teen of course is one Kevin Tran.  When he wakes from his lightning-induced coma, he goes in search of the tablet, although he has no idea why.  Not only does the broken tablet mend in his hands, he’s able to read its writing, albeit with difficulty.

The new, kinder, gentler Castiel has a sense of humor; but he’s also a bit philosophically wonky, which drives an irritated Dean nuts.

But even a wonky angel is useful.  He explains the tablet is the  word of God, written by God’s scribe Metatron.  (Interestingly, it’s Sam, not movie-obsessed Dean, who confuses Metatron with Megatron, the evil transformer.)  Castiel also tells us that Kevin is a prophet.

None of this meant much to me in mid-2012.  But now that we’ve actually met Metatron, it’s canon.  (Plus, I’ve since seen Transformers, so I have a point of reference.) 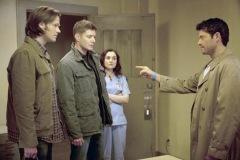 The episode answered some questions I’d had of late, explaining the bond between Meg and Castiel, and how a demon got hold of an angel sword.  At least I think it did.  Anyway, I’m satisfied.

“Reading Is Fundamental”  is the second  episode written and directed by Ben Edlund reviewed in as many weeks.  Both episodes were near the end of their seasons, which begs the question, how did we cover an entire season in just one week?  Did TNT pull a  Supernatural mini-marathon?

Anything to add to the initial review?  Yes there is, and it warrants a one-star downgrade.

It was Boring, with a capital B!  Sam’s memories were so dull, they felt like filler.  Benny’s long, drawn-out yapping (when I could understand him) was just so much exposition.  I had to fight the urge not to fast-forward through the episode.

In light of the Dean-killing-Amy fallout in last week’s “The Mentalists,” Dean’s insistence that Sam not kill Benny was quite a reversal.  I suppose a year in purgatory will do that to you.  Speaking of purgatory, did you notice Castiel was still wearing his ‘hospital pajamas” from season 7?  Yes?  You’re more observant than I.

Remember  when Supernatural was about hunting urban legends and searching for Dad?  When the laptop was covered in decals and Jared Padalecki weighted less than 200 pounds?  Dean wore leather bracelets and still had his amulet necklace.  Ah, the good ol’ days.

Set in my home state of Iowa, it starred Dan Butler, whom I loved on Frasier, and featured one of the scariest urban legends ever.  It should have been spectacular, but it wasn’t.  I believe Nicholas Knight said in The Official Season 1 Companion there were problems with the episode, that the initial director was fired and David Jackson brought in.

The series was still finding itself.  The smell of ozone indicated the presence of a spirit.  The boys used equipment never seen again.  Here it was a searchlight attached to the Impala’s side view mirror.

Great villain. Not so great episode.

Most people would likely give this episode two stars.  But for all its faults, “Hook Man” had its good points, too.  Supernatural does an excellent job of portraying clergy.  Even in episodes such as this and “Faith,” where the clergyman appears to be of dubious character, he’s not.  And the special effects are imaginative.  Here we see the Hook Man appear and vanish in a black mist, and watch as his hook melts and his “body” burns, crumbling to ash and then to nothing.

“Hook Man” also gave us our first look at two details that have become canon.  Dean’s idea for turning rock salt into shotgun ammo has become a staple for dealing with spirits.  And Dean’s disappointment when Sam walks away from “the girl of the week” is our our first indication of Dean desire for Sam to have the normal, happy life he’s longed for.