Jensen Ackles has said that season 1 is his favorite.  It’s what launched the juggernaut; and it’s what brought the cast and crew together.  Let’s look at the top ranked episodes,based on ratings from IMDB, TV.com, and me.  (Remember, the stars are my ratings only.) 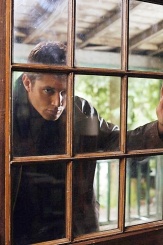 Agent Hamil. Or is it Ford?

This may be the only mid-season episode written by Eric Kripke.  So it must be special, right?  Sam and Dean return to their old home in Lawrence, KS, to investigate one of Sam’s visions.  Reviewed here.

The episode that started it all.  How many times have you watched it?

A spooky, creepy story, and an intense confrontation between the brothers.  What could be better?

I haven’t figured out why this episode received such (relatively) low ratings on IMDB and TV.com. It’s a wonderful story and shows us a side of Dean that we seldom see.  If not for my vote, the episode wouldn’t have made the top 5.  Here’s why I love it.

This episode grew on me.  I enjoyed it the first time, but rewatching made me realize just how good it is.  It’s a pivotal episode—our first realization that Sam has visions of death.  And it’s downright scary!

“Scarecrow” would have made the top 5 had it not been for my “average” rating.  It certainly was important in the overall story arc.  Meg made her debut and we learned about the “blood phone.”  But I didn’t like Sam and Dean separated and at odds with each other.