Been there, done that.

What did you think  of the Doctor Who season finale (both parts)?  Yeah, yeah, the finale aired over a week ago but Doctor Who is usually pretty memorable, for good or bad.  It seems fan reactions are all over the place.  You might count me among those who didn’t like it, but “dislike” is too strong a word. 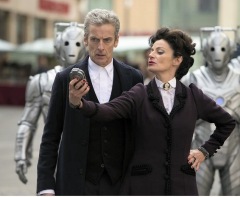 In general, I don’t care for episodes that focus on the Master, now Missy.  (“The Mistress”is a terrible name for her.  It sounds like a kept woman.)  The character is so off-the-charts whack, it’s hard for me to understand his/her motivation.  It seems to boil down to Missy’s desperate desire to win back The Doctor.  But how is destroying the planet he loves going to do that?  Then again, she is insane, quite literally.

A few weeks ago, YouTube’s Emergency Awesome/Charlie had said he felt that Danny was going to be tragic figure, likening him to Rory Williams’.  But Rory was well-defined, where Danny wasn’t.  We saw Rory’s interactions with Amy and felt their love.  With Clara and Danny, we were only told they loved each other.  We didn’t see it.

Even so, I was disappointed Danny died.  I suppose it was integral to the plot, but it left a gaping hole through which Orson Pink fell.  It’s not like Moffat to drop something that significant.  Speaking of the Moff, why does he feel the need to fuck over every companions?  Can’t they just have a happy ending?  Clara’s departure was possibly the most “normal,” but it was tarnished by lying to The Doctor.  Then again, The Doctor lied to her, too.

I did love the unexpected return of the Brigadier.  Not only did he finally get his salute (and save his daughter, an awesome character), The Doctor’s comment about him “of course” being there in Earth’s darkest hour spoke volumes about his character.

Peter Capaldi has done a great job of making the Doctor his own.  He’s not a particularly likeable Doctor, but he certainly is entertaining.

5 responses to “Doctor Who Season 8 Finale”