Let’s get right to business.  According to IMDB and TV.com, season 4 boasts seven (7) top 3 episodes.  They are:

The hand of God burns.

END_OF_DOCUMENT_TOKEN_TO_BE_REPLACED

The best-rated episodes for the second half of season 4 follow.  If we didn’t count my own personal ratings (the stars) the order of the episodes would have been different.  “The Rapture” would have been #3, “When the Levee Breaks” #4, and “It’s a Wonderful Life” #5.

Dean and Sam discover a series of books by “Carver Edlund” (a mash-up of writers Jeremy Carver and Ben Edlund) which chronicle their lives.  It’s the classic case of predestined destiny; even as the boys try to change the outcome, circumstances keep pulling them back on track.

The first 15-minutes contain some of Supernatural‘s most humorous moments as the Winchesters confront author Chuck Shurley (Carver Edlund’s real name) and realize their lives are literally an open book.  The episode also provides an opportunity for Eric Kripke and company to poke fun at the fans, who, as Dean says “… for fans, they sure do complain a lot.”  (That comment is still true today.  Just read any episode thread at the Television Without Pity Supernatural forums.)

After that, however, the episode becomes darker.  Chuck’s most recent story has Sam meeting Lilith in a motel room.  Sam is anxious to have a showdown with the uber-demon, but Dean wants nothing more than to avoid the situation.  Dean attempts to go “off-book” while Sam and destiny thwart him at every turn.  Eventually Dean resorts to prayer (and threats) to successfully alter the outcome.

END_OF_DOCUMENT_TOKEN_TO_BE_REPLACED

It’s time to look at the 5 top-rated episodes from the first half of season 4, as determined by IMDB, TV.com, and me.  (The stars are my ratings only.)  There was a tie for fifth place, so we’ll actually look at six episodes.

It’s not just season 4′s best episode, it’s one of Supernatural‘s all-time best.  Some say it’s the best episode ever.  It’s certainly one of my top 5, maybe top 3.   It’s even the reason I bought a wide-screen television!

After Dean was sent to hell at the end of season 3, fans waited impatiently for September 2008.  At Comic Con that summer, Eric Kripke and company showed a clip of the episode—Dean discovering a hand print burned into his upper arm.  It only heightened anticipation for the season premiere.  And “Lazarus Rising” did not disappoint.

The good old days, when Pamela still had her eyeballs.

The first seven minutes or so contained little to no dialog, yet we sat on the edges of our seats.  Throughout the episode, strange happenings let us know a powerful force was at work.  This force had leveled a forest and produced a high-pitched, glass-shattering whine (not to mention burning eyeballs out of skulls).  When it finally appeared, in the form of a trench-coated Misha Collins, it was immune to every demon-warding symbol, rock salt, and Ruby’s demon-killing knife.

END_OF_DOCUMENT_TOKEN_TO_BE_REPLACED

Wow, lots of things happened between “After School Special” and “Jump the Shark.”  We learn Dean broke the first of the 66 seals, Sam is drinking demon blood, and Chuck the prophet has been recording the Winchester gospels for posterity.

Speaking gospels, this episode had a lot of detractors before it aired.  How could the creators blaspheme the sanctity of the Sam/Dean relationship by adding another brother?

It helped that Jake Abel, who played half-brother Adam Milligan, looks like (as one reviewer noted) the love child of Jenson Ackles and Jared Padalecki.

When Dean and Sam learn of Adam’s existence, Dean is certain it’s a trap.  But Adam appears to be simply a young man distraught over the disappearance of his mother. Although Dean is jealous that Adam got to spend some “normal time” with John Winchester, he’s also determined that Adam stay out of the life of hunting monsters.  Sam, on the other hand, wants to prepare Adam for what’s out there.

END_OF_DOCUMENT_TOKEN_TO_BE_REPLACED

Dean contracts “ghost sickness” and has only 48 hours before he’ll die of fear.   As he grows more and more paranoid, he and Sam have to figure out what they’re dealing with.

Therein lies this episode’s first controversy. Although both brothers come into contact with the corpse of another “ghost sickness” victim, only Dean is affected.  The reason given why Sam appears to be immune is that the disease only affects “bullies.”  So the show is saying “Dean is a dick, but Sam is not.”

Geez, I wouldn’t need ghost sickness to be frightened here.

Except that’s not what the show is saying.  At this point in the story arc, Dean has spent time in hell, and although he says he doesn’t remember anything of his time there, it’s been hinted otherwise.   “Yellow Fever” confirms that Dean remembers.  Although we don’t yet know what happened, it’s obvious Dean is shaken and feels extremely guilty.

The other outcry came when Bobby and Sam road-hauled a ghost.  Fans said it was much too violent, and wasn’t in the  Winchesters’ nature.  Yet Bobby and Sam were desperate to save Dean, and there was no other option for them.  Bobby said, “This is a terrible plan.”  Plus, the victim was a ghost.  The real violence occurred when the flesh and blood Luther was road-hauled to death.  The way I see it, if the ghost is dead, the spirit is now at rest.

END_OF_DOCUMENT_TOKEN_TO_BE_REPLACED

This was the part of season 4 I didn’t like.  The part where Sam becomes closer to Ruby and more distant from Dean.  Season 4 is generally considered one of Supernatural‘s best, and it is.  But having been caught up in the glow of its brilliant early episodes, I’d forgotten the major “ick” factors from the second half of the season that made me kind of sick to my stomach. 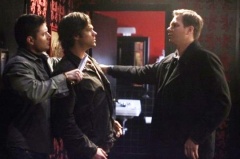 Nothing says “I love you” like a knife to the throat.

I also forgot nearly everything from this episode except the meat tenderizer.   (This one is sooo much better, but perhaps not as gruesome a murder weapon.  Then again, those blades are damn sharp!)  The doctor, Sam having sex with the doctor (who lived!), the strippers all named after Disney princesses, FBI agent Hoyt Fortenberry, and Dean and Sam’s brutal attacks on each other.

It was a nice twist that Dean’s perfect love wasn’t a stripper, but a younger brother who looked up to him and loved the same things he did.

“Sex and Violence” wasn’t a bad episode, especially when putting all the speeches about love in the context of the Winchester brothers.  It just wasn’t memorable (obviously).

I tend to love the humorous episodes, and this was no exception.  Yet even with all the silliness, there were significant, serious moments.  Dean confessed he remembered his time in hell.  Sam revealed his violent rage against Lilith.

The visually stunning backdrop, one of the show’s very best, was a bonus.

When the episode first aired, some fans complained about how cavalier the writers treated a woman who’d been “mind-raped” (for lack of a better word), forced to feel emotions against her will.  Personally, I’d have been more upset about a couple taking off for Bali, leaving their young daughter at home all alone with a giant suicidal teddy bear.  But what are ya gonna do?  (There’s  plenty more to say about bitching fans, but I’ll leave that for future reviews.)

I’m torn between  giving “Wishful Thinking” 4 or 5 beer mugs.  Not sure it deserves 5, but I liked it better than some 4-mugs-rated episodes.  (Edited to add:  I decided to go with 5 mugs.  I figure others will vote it down from there.) 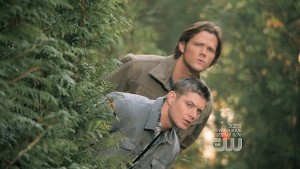