The synopsis of “Brother’s Keeper” starts something like this:

Yeah, Sam’s life would have been altered, all right—in that he wouldn’t have had one.  Talk about understatement! 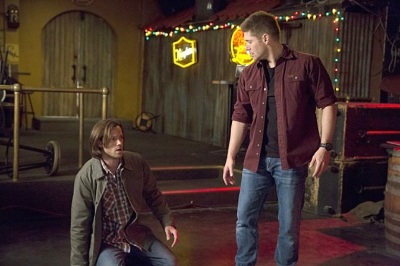 Can Sam be Dean’s “keeper’ if he’s dead?

The other night I was trying to recall the various Supernatural season finale’s over the years, in anticipation of how bad this season’s might be.  We’ve had an epic car crash, a couple deaths, a crossroads deal, the beginning and the end of the apocalypse, demons released from hell, and angels released from heaven.  Given the events of the last few episodes, this season was definitely heading for an Epic Cliffhanger of Winchester Angst (ECWA, for short).

END_OF_DOCUMENT_TOKEN_TO_BE_REPLACED

Dean and Sam say a final farewell to Charlie.

Season 10’s penultimate outing was an excellent episode.  It was well written; taut, suspenseful, action-packed, and emotional, with great performances all around.

You know what I liked about it?  Nothing.  So much so, I deleted it from my DVR without rewatching  it.

Mood-wise, the show is at an all time low.  I’ve never felt this depressed, even at the height of the apocalypse at the end of season 5.  But then, I didn’t like that storyline very much.

END_OF_DOCUMENT_TOKEN_TO_BE_REPLACED

Sam and Cass are on the case.

Trivia time!  What movie was featured that’s in my list of top 10 favorites?  I can even tell you why it’s a favorite, but that tale would belong under Sea Stories.

Terrible episode title; not too bad actual episode.  After the preview of the “teenage girl” monster, the episode actually had a lot of substance.  But I’m not here to discuss substance.  I am here to make a list.

We got a new Claire earlier this season.  This time it’s a new Amelia.  I don’t remember the old Amelia, but this one seemed appropriate given her emaciated appearance.  Living on angel juice for two years probably isn’t calorie intensive.

END_OF_DOCUMENT_TOKEN_TO_BE_REPLACED

I knew there was a reason I needed to go back and watch “The Executioner’s Song” to better understand “The Werther Project.”  Both were written by Robert Berens.  Both were superb (and both make up for “Alex Annie Alexis Ann”).

When an intricately woven plot stands up to scrutiny, that’s a great episode.  When it adds a good-size chunk of personal drama, that’s grand.

In this corner, Sam and Rowena…

… In this corner, Dean and Benny.

The most interesting aspect of “The Werther Project” is that it gives us clear insight into the psyche of both Winchester brothers.  After 10 years, we have a decent understanding of the inner workings of Sam’s and Dean’s minds.  Getting to see those workings in action is still marvelous, and it’s usually much worse than we imagined.

END_OF_DOCUMENT_TOKEN_TO_BE_REPLACED

Coverage of this week’s Supernatural episode “The Werther Project” will be forthcoming.  But first I need to untangle my brain.

Remember when I was so enthralled with the Sam/Charlie chemistry that I forgot Charlie is gay?  One of my dreams was that Sam and Charlie would go off searching for the Book of the Damned.  I got half my wish.  Charlie returned with the book, and it is truly one damned book. 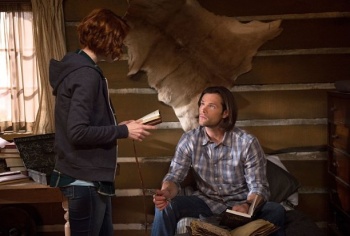 As we near the end of season 10, nearly everyone is behaving less than optimally.  In other words, the ususal.  Surprisingly, the brooding Winchester brother is not the one you’d think it would be.  Who’s behaving and who isn’t?