For an episode with The Big Reveal (that Harrison Wells is a guy from the future named Eobard Thawn), “The Trap” it felt a bit underwhelming.  (Which is why this post is a tad late.)  The Little Reveal, that of Iris realizing Barry is The Flash, was much more satisfying.

Reminiscent of  an episode of Lost, one or two questions were answered while 45 others were raised. Perhaps those of you familiar with The Flash from DC Comics lore know the answers.  Or do you?  If the television show creators have tweaked the story, then you might be in the same boat as the rest of us.  If so, ha-ha.

(There is a poll is after the break, so be sure to click it.)

END_OF_DOCUMENT_TOKEN_TO_BE_REPLACED

You can vote for two shows.  Two shows only.  Otherwise, things could be messy.  Of course, that’s assuming anyone (besides Natalie) will vote.  😉

C’mon followers, all it takes is one or two ticks.  Don’t be shy!

(Sleepy Hollow isn’t included because it’s already been renewed for a second season.)

Now that Supernatural March Madness is over, it’s time to get back to reviewing and rating the shows.  And there’s an exciting new twist —> YOU get to rate the episodes!

We could use stars to rate the episodes, as I’ve done in the past.  Or we could make the experience more personal with other icons.  Here are our options:

“Wait!  Where is ‘In My Time of Dying’?” you ask.  It has been retired as the undefeated champion of all previous Supernatural March Madness tournaments.  It’s time to give another excellent episode a chance to shine.  So, shall we continue? 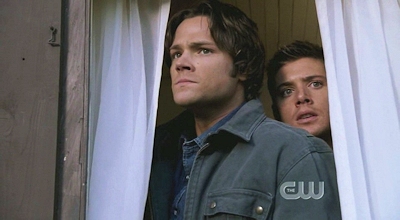 Sam wonders “Who will win this year’s Supernatural March Madness?”

END_OF_DOCUMENT_TOKEN_TO_BE_REPLACED

In a world gone bad, who’s the baddest of them all?  With Cora and Captain Hook arriving in Storybrooke, there’ll be no shortage of baddies.  So, who will you be cheering for come 2013?

END_OF_DOCUMENT_TOKEN_TO_BE_REPLACED

First of all, please take my very short poll!  All you have to do is indicate one answer and click “vote.”  It’s painless and you can’t fail.  😉

Secondly, I’ve been without internet access for a couple days.  😦  Man, you don’t realize how much you depend on the internet until you’re without it.  Too add salt to the wound, I was actually writing a review when it happened.

Look for reviews of Grimm, Once Upon a Time, 666 Park Avenue, Supernatural, and Last Resort in the next couple days.  I might even top it off by adding Elementary to the list.

In honor of achieving 100 posts, I decided to do a poll.  On my About page I said I wouldn’t be doing recaps per se, but lately I’ve been doing more and more recaps.  So, what do you think?  Which do you prefer reading?

Please vote even if your only passing through.   It’ll take only a second.  😀