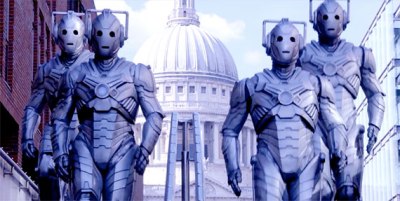 Been there, done that.

What did you think  of the Doctor Who season finale (both parts)?  Yeah, yeah, the finale aired over a week ago but Doctor Who is usually pretty memorable, for good or bad.  It seems fan reactions are all over the place.  You might count me among those who didn’t like it, but “dislike” is too strong a word.

In general, I don’t care for episodes that focus on the Master, now Missy.  (“The Mistress”is a terrible name for her.  It sounds like a kept woman.)  The character is so off-the-charts whack, it’s hard for me to understand his/her motivation.  It seems to boil down to Missy’s desperate desire to win back The Doctor.  But how is destroying the planet he loves going to do that?  Then again, she is insane, quite literally.

A few weeks ago, YouTube’s Emergency Awesome/Charlie had said he felt that Danny was going to be tragic figure, likening him to Rory Williams’.  But Rory was well-defined, where Danny wasn’t.  We saw Rory’s interactions with Amy and felt their love.  With Clara and Danny, we were only told they loved each other.  We didn’t see it.

END_OF_DOCUMENT_TOKEN_TO_BE_REPLACED

Aha!  I bet you thought I’d forgotten about this site.  Fooled ya!

It’s been a restful summer, sci fi-wise.  There are a few sci fi shows currently airing, but they’ve not grabbed me.  Then there was the demise of Believe, the show that could have and should have been so much more.  I started draft after draft discussing its final episodes, but it seems rather silly to say anything now.

So let’s move on. 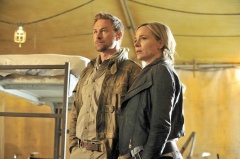 Have these two hooked up yet?

This summer has brought us the second season of Defiance.  My best friend and her husband love Defiance.  But they also loved Battlestar Galactica, a show I never cared for.  I watched a few episodes of Defiance last year but quickly lost interest.  I like Julie Benz; it’s great to see her in a strong female role.  I like Graham Greene, but his character wasn’t (isn’t?) very likeable.  The show killer for me, however, is Jaime Murray.  I first saw her (and her breasts) on Dexter, where she played a despicable, often naked character.  It formed a hatred of her that seems to have left a permanent mark.  Not even her turn as H.G. Wells in Warehouse 13 softened my feelings.

END_OF_DOCUMENT_TOKEN_TO_BE_REPLACED

Well crap.  Intelligence was cancelled in favor of another season of The Mentalist.  That makes yet another show down the drain.  My Current SciFi category is going to be significantly smaller next season.   Let’s look at the count.

END_OF_DOCUMENT_TOKEN_TO_BE_REPLACED

Want a show where nothing goes right?  Welcome to 24: Live Another Day.

FU #1:  Last week, the CIA raid on the terrorist compound turned out to be a trap.  An armed U.S. drone, controlled by the terrorist, demolished the building, but we didn’t know if anyone survived.  The two series regulars, station chief Steve Navarro (played by my beloved Benjamin Bratt) and new agent Eric Ritter survive, but four “red shirts” don’t.  (FYI, Benjamin Bratt looks fabulous with his face all dirty—and bloody.)

END_OF_DOCUMENT_TOKEN_TO_BE_REPLACED

Well geez, if I’d remembered Channing was shot in the last episode, I might have watched this episode sooner.  Good news for Jamie Chung fans.  She lives.  Oops, spoiler.  Sorry.

It’s a good thing the writers didn’t wait too long for Tate find out he’s Bo’s father, since Believe has been not renewed.  His interactions with Bo have become so much sweeter.  He even kissed her in “Collapse.”  (Maybe he’s done it before.  I don’t remember.) 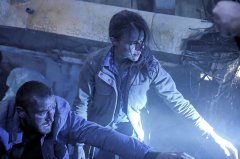 In general, I don’t like main characters in perilous situations.  I fast-forwarded through the bulk of 127 Hours. When Magnum, P.I. was lost at sea, I really didn’t want to watch an hour of Thomas treading water. (Of course, there was much more to the story, with Magnum’s memories and the search for him).

Thus, I wasn’t looking forward to “Collapse.”  Yes, there were the tropes of the dying batteries and no cell phone service (except there was).  But having Tate and FBI Agent Farrell not only working together, but sharing similar pasts was a nice touch.  And Farrell turns out to be pretty darned awesome! END_OF_DOCUMENT_TOKEN_TO_BE_REPLACED

Chloe’s back! With a rad haircut and tons of eyeliner.

Its Monday evening and I don’t have anything to watch!  After a season of Sleepy Hollow, Almost Human, Intelligence, and Warehouse 13, not to mention my silly obsession with Dancing with the Stars, my evening is free.

Well, there is 24: Live Another Day, complete with London and Benjamin Bratt.  I suppose it could pass for science fiction as much as Last Resort.  Like Last Resort, 24 takes place the real world (of fiction), with real problems.  But its premise and action are so bizarre, it goes beyond plain fiction.  Perhaps we could say Chloe’s mad computer skills tip the show into the science fiction realm.

Or, I could just watch last night’s Believe.

It’s that time of year, when most of the shows on the broadcast networks are finishing their seasons.  Agents of SHIELD concluded magnificently last week.  How did Grimm and Warehouse 13 fare?   (Supernatural will get its own post later.) 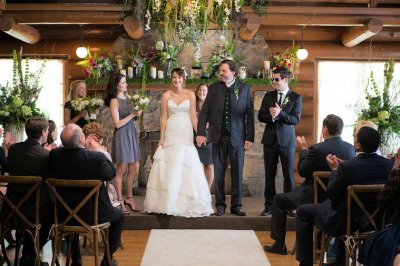 Even with all the vows and such, we still don’t know Monroe’s last name.

Grimm isn’t a show frequently covered here, but the season finale is worth mentioning for the sheer number of stories left up in the air for next season.

Monroe and Rosalee were married.  On the night before the wedding, Rosalee’s sister ruined their grandmother’s wedding dress, which Rosalee had planned to wear.  Thank goodness, because it was one ugly dress!  Monroe’s parents bribed the bridal shop to open early so they could buy a $7,200 dress for Rosalee on the day of the wedding  (She’s worth it.)  They’ve come a long way from protesting the mixed-Wesen marriage.

All of the show’s arcs come together quickly with action and blood galore.  Where to start? END_OF_DOCUMENT_TOKEN_TO_BE_REPLACED