The announcement of Cressida Cowell’s latest book, The Incomplete Book of Dragons (or The Complete Book of Dragons in the U.S. because we apparently are stupid) inspired this post a couple days ago. In describing the different covers, I remembered something I’ve been thinking about for a while—how the movie might possibly have influenced the books. 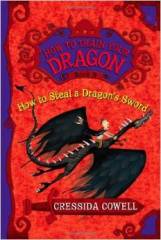 As every fan of the books knows, the movie is only loosely based on the books.  Hiccup is significantly older in movie, there is no Astrid (although there is Camakazi, whose dragon is named Stormfly), and Toothless is an entirely different type of dragon (as is Stormfly).

In the books, Toothless is a small Common or Garden dragon, much like the Terrible Terrors of the movie.  He’s also exceptionally noisy, self-centered, and disobedient.  (But in a lovable way.)

Hiccup’s riding dragon in the books is the Windwalker.  Personally, I think he’s based (at least partially) on the movie’s Night Fury Toothless.  He’s completely black and among the fastest flyers of the dragon species.  When Hiccup first picked him, the Windwalker was rather pathetic.  He was timid, appeared to have been abused, didn’t speak (book-Hiccup is able to speak Dragonese), and he was physically damaged.  Even now, six books later, he still has a bandaged foot.  (Well, except for his featured cover.) END_OF_DOCUMENT_TOKEN_TO_BE_REPLACED