Your thoughts on “The Executioner’s Song?”  Here’s mine. 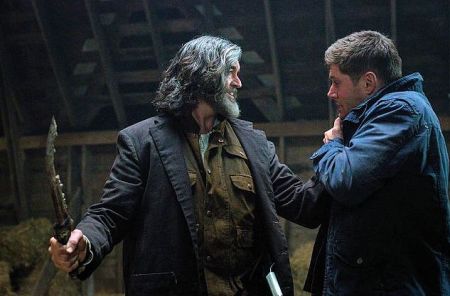 It’s the Battle of the First Borns.

In the past I’ve called him the most underrated actor in Hollywood.  But recently he hasn’t overwhelmed me.  His performances haven’t been bad—I don’t think Jensen’s talent or work ethic would allow that—but they haven’t been as riveting as I’ve come to expect. It was wonderful to see him back in full form again.  Every single one of Dean’s scene in “The Executioner’s Song” was magnificent.  Even before his confrontation with Cain, Dean’s fear and sorrow drew me in and didn’t let go.

END_OF_DOCUMENT_TOKEN_TO_BE_REPLACED

With the new fall season about to start (where did the summer go??), it’s time to look back on the last season of Supernatural.  While season 9 wasn’t quite as good as season 8 (which re-energized my love—and Suzanne’s—for this show), it had its gems.  We had two excellent story arcs with several shocking twists and turns along the way.

Here are my seven favorite episodes from an excellent season, in chronological order (since I’m not sure I could rank them).

Do the post title mash-ups help indicate which episodes are discussed?  E.g., Route 666, Devil’s Trap, Southern Comfort.  Not so much?  Yeah, I was afraid of that.  (But that doesn’t mean I’m going to stop.)

One of season 1’s worst episodes, unlucky #13 had a lot of problems, not the least being written by the team many consider Supernatural‘s weakest writers.  Initially set to take place in Mississippi (or Alabama?), unseasonably cold and snowy weather in Vancouver, Canada (where the series is filmed) forced the setting to move further north, to southeastern Missouri.  Exploring racism in the turbulent ’60’s was a worthy topic, but making the evil spirit a racist ghost truck was rather preposterous.  Even Sam, reminiscing about college, noted “I miss conversations that didn’t start with ‘this killer truck.'”  Casting beautiful but wooden Megalyn Echikunwoke as Dean’s implausible love interest did the show no favors, either.